Journey to Mecca: In the Footsteps of Ibn Battuta 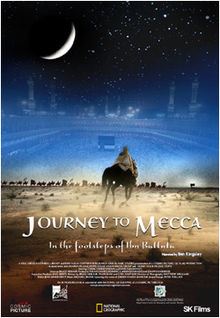 Synopsis
Narrated by Ben Kingsley and distributed by National Geographic; "The 20-year-old Muslim religious law student Ibn Battuta (1304–1368), whose full name was Abu Abdullah Muhammed Ibn Abdullah Al Lawati Al Tanji Ibn Battuta, set out from Tangier, a city in northern Morocco, in 1325, on a pilgrimage to Mecca, some 3,000 miles (over 4,800 km) to the East. The journey took him 18 months to complete and along the way he met with misfortune and adversity, including attack by bandits, rescue by Bedouins, fierce sand storms and dehydration.
Ibn Battuta spent a total of 29 years travelling and covered 75,000 miles (117,000 kilometres) before he finally returned home. He travelled "further than any writer before him [...] covering most of the known world", through Africa, Spain, India, China and the Maldives.
On Ibn Battuta's return the Sultan of Morocco requested that he relate his experiences, and this was to become what the Saudi Gazette referred to as "one of the world's most famous travel books", the Rihla (Voyage)." [Wikipedia]
When Ibn Battuta reached Egypt, he received help from a sheikh after he handed him a letter from a friend in Tangier. The sheikh listened to his dream and told him about a saying from the Prophet Muhammed, "Go in search of knowledge even if your journey takes you to China." This inspired Ibn Battuta to travel all over the known world.
Genre
Documentary
Released
2009
Location
Islam
Netflix
No

This movie is linked to the following periods